Bulbasaur Costume for Children In Need

"As its Children in need on Friday we are giving you the opportunity to send your child into school dressed up as a character from a children's TV show!"

Okay so here's the deal, Lil man is not a fan of kids TV [something I thank Jesus for everyday because I cannot cope with Topsy and Tim or Peppa pig]. Instead he chooses to either watch Disney movies [which I LOVE]  or he's a huge fan of sports shows like football and golf and of course for some strange reason he loves only fools and horses! Which left me in a bit of a pickle because what on earth do I send him as? Del boy? A football pundit? I mean the brief said KIDS tv!

Luckily I remembered that a few weeks ago him and Rikki binge watched the first few seasons of Pokemon and he really enjoyed it. We did try and find a ready made costume but the only ones we could find either cost upwards of  £20 or wouldn't arrive till December. So it looked like it was done to me to try and whip something up! 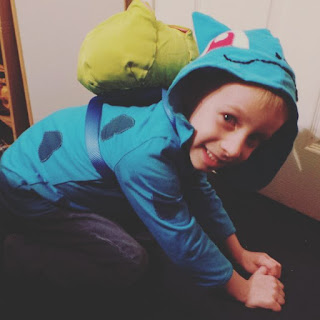 So I had a quick look through my fabric cupboard and found a piece of jersey that's roughly the right colour for Bulbasaur. And set about trying to make something [I started two days before he actually needed the costume because I'm a maverick like that!]

And to make matters even harder the school had added their own list of specifications!

I decided the easiest thing to do would be to send him in jeans [I added a few patches/scales to these] and to make him a simple hoody he could wear over a tshirt and to make the bulb part as a rucksack he could take on and off himself. 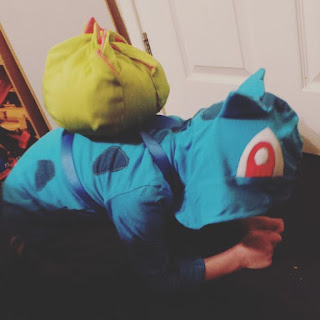 The rucksack/bulb is a ball of stuffing covered in "leaves" made from some green fabric I had. The leaves are lined in a salmon colour because that's the colour of the flower Bulbasaur has when he evolves [Pokemon evolve as they get bigger, its like the whole thing in the TV show].

For one brief crazy moment I did consider making it with a flower underneath so he could evolve throughout the day.... But then I realised that would be massive overkill for a costume that's only going to be worn once.

All of the leaves are stitched on by hand to try and achieve a more natural shape and look. 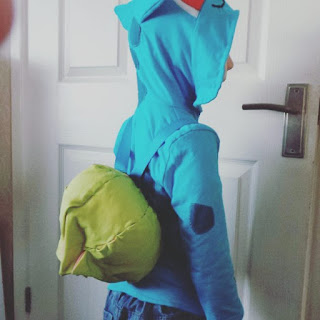 The straps are made from some webbing that I had in my stash, luckily It was a dammed near perfect colour match. And after much pinning and adjusting we found a good strap length so that Lil man could take it on and off himself. 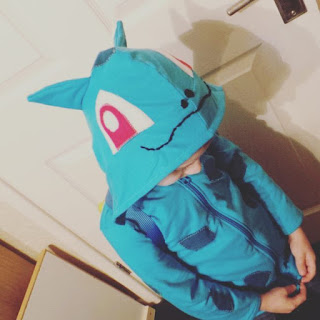 The pattern for the Hoody came from Freesewing.org  and saved me from having to draft a pattern from scratch. Luckily I already had most of lil mans measurements on the website the only ones I had to add were how big his head it and his wrist size. Both of which I had to guess, which is why I think the hood came out a bit shallow. But I just added a piece onto the front so I'd have enough room for Bulbasaurs face.

I also didn't use ribbing for the cuffs etc like the pattern said because I didn't have any which is why the sleeves are a touch too short. In stead I chose to fully line the hoody with the same fabric [Luckily it was pretty thin so it needed lining to keep the shape] and them to top stitch around the edge.

The jerseys is from my stash and I;m pretty sure it came from my friends Nans house and the darker patches are from one of lil mans old t shirts that was getting a bit scraggy. I appliqued them on using a zig zag stitch and it took blooming ages! The eyes are made from some small pieces of felt and the nose and mouth are black wool.

I even remembered to insert some cute little ears into the hood. Although I am gutted that they don't stand up very well.

All in all I'm really pleased with it! Even more so because it cost NOTHING! Even the zip was recycled from an old hoody! #winning

I was a bit worried that he'd be a bit obscure but lil man was really happy with it and some of the other kids immediately recognised him as Bulbasaur so that's a plus.

Now I just need to start planning for the next costume day! 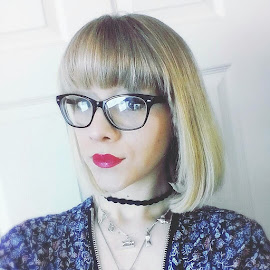